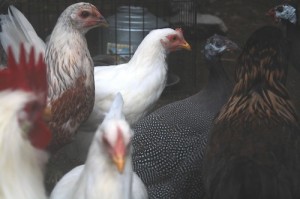 I thought it was Cresty, but I was never sure because she looked just like the other white one. There was no doubt, however, that she was immobile. Jellybean was standing over her, almost as if she expected the chicken to rise and keep up the chase that had surely led to this disaster. Jellybean was the 9 month old lab, the culmination of six months of searching through shelters and foster homes, filling out online rescue dog applications, repeating my pet owner history, as if any of it could be verified. Jellybean was the prize worth the search. Smart, gentle, friendly, calm for a puppy, but alert and engaged. She’d sat so lovingly with Jodi, her owner-to-be, on the college track field, ignoring the chaos of the rescue pet fair, of homeless dogs, cats, and parrots, of festive young volunteers, of curious pet lovers. It was our first step, my daughter Jodi’s and mine, in the process of acquiring her a companion and protector, a service dog for her anxiety.

When Jellybean first ran out into our large, fenced-in yard, we did not dare let the chickens out. After weeks of controlled introductions, tugging leashes, flailing, constrained birds (“No! Come! Leave it!” “Good, walk away, yes…” ), Jellybean was getting the picture fast. (OK. They are not play toys, and they are not food.) She chased them, as our older dogs did, just enough to make them flap and take off, just to keep them on their… claws. I felt we had reached nirvana the day I found not only Jellybean, the other two dogs and the chickens calmly strolling the yard together, but also the neighbor cat, “Munchie”, who ran off when he saw me, apparently having been part of the bucolic scene. All was well, and I relaxed.

That was why I was so shocked at the carnage I saw through the kitchen window: the beautiful, white chicken, splayed stomach-down on the grass surrounded by her own feathers, stained with her own blood. I ran out for a closer look. Pushing Jellybean aside, I saw that the damage was to the neck. It was stripped of feathers and even some skin. I could detect the vertebrae. She was limp. But then the worst became evident: her eye was blinking. She was alive. Now what. I had always thought I would learn to “process” a chicken, why not start now? I imagined myself wielding the axe over the terrified animal, with my poor aim, more blood, the dogs standing by, curious… I thought better of it. My friend Manuel had, from the time he was a boy in a tin-roofed home in the mountains of Nicaragua, turned countless fluffy friends into dinner, so I called him.

Thankful for his promise to hurry over and make the dying chicken disappear, I covered her frame, locked the surviving fowl in the coop, and went off to pick up the kids. The kids. What would I tell them? Nothing. We would arrive home under a curtain of darkness, they would not notice the missing hen until tomorrow, and I would plead ignorance. In fact, I hadn’t actually seen what had happened. Is it possible that Jellybean was just a concerned witness? Maybe. The neighbor cat could have been the turncoat, or perhaps a hawk had… Yes, that would be my story: a hawk. We needed to preserve at all costs the bond between Jellybean and Jodi, so when they found the feathers in the yard the next day, I reminded my trusting girls that the hawks always go for the white ones. I was surprised at their calm acceptance. Perhaps they were starting to absorb my admonitions that the beloved chickens would some day be food for someone. Perhaps the first fatal chicken attack, several months prior, by a fisher or raccoon, had immunized the girls. For whatever reason, they were only mildly perturbed. In the meantime, I kept the chickens in their pen and secretly took Jellybean back to the drawing board on chicken tolerance training.

It was not unusual for Manuel to arrive unannounced. He often drops off scrap wood that he recycles for our projects, he checks on the chickens, and comes in for a chat. So when he appeared in his huge truck on a Saturday morning two weeks after removing my chicken, neither my wife, Doreen, nor I paid attention as he walked to the pen. He waited until I came outside, and said, “Look in the pen”.

I rolled my eyes, “If you brought me more chickens, you are going to have to help me enlarge the coop!”

I couldn’t believe my eyes. Cresty peered at me from behind the fence with the jerky head movements of a healthy hen. “She was as good as dead!” Was all I could say, “I thought you ate her!”

Manuel beamed, “I lifted her head and fed her a few times a day, and here she is. I could never eat her now that I have cured her.” He went on to say that she had stopped laying only briefly, and resumed laying daily even though she could barely sit up. Now she was making the rounds of the pen, greeting her feathered family, clucking and pecking.

The girls forgave me for lying to them, and, as the hens roam the yard, you can read Jellybean’s mind in her very gaze, “It’s family, not food… family not food… “. We invited Manuel over for a hot, tasty, dinner of roasted — yes, chicken (from a local farm). While we have all learned a lesson in resilience, the boundaries separating family, predator and prey are forever blurred in my home.

This entry was posted in Uncategorized. Bookmark the permalink.